Cloud gaming: Is Game Streaming Bad For The Planet?

Cloud gaming promises top-tier graphics and performance without the expensive hardware – with no more massive updates or downloads.

But some studies suggests it could be more damaging to the planet.

One recent study from Lancaster University estimated that if gamers moved to streaming over the next decade, carbon emissions could rise by 30%.

Instead of having a high-end PC or games console in the home, cloud gaming platforms run the software from a remote data centre.

And the internet itself uses a lot of power.

“There are a lot of things that have to spring into action,” explains Mike Hazas, one of the Lancaster University researchers. 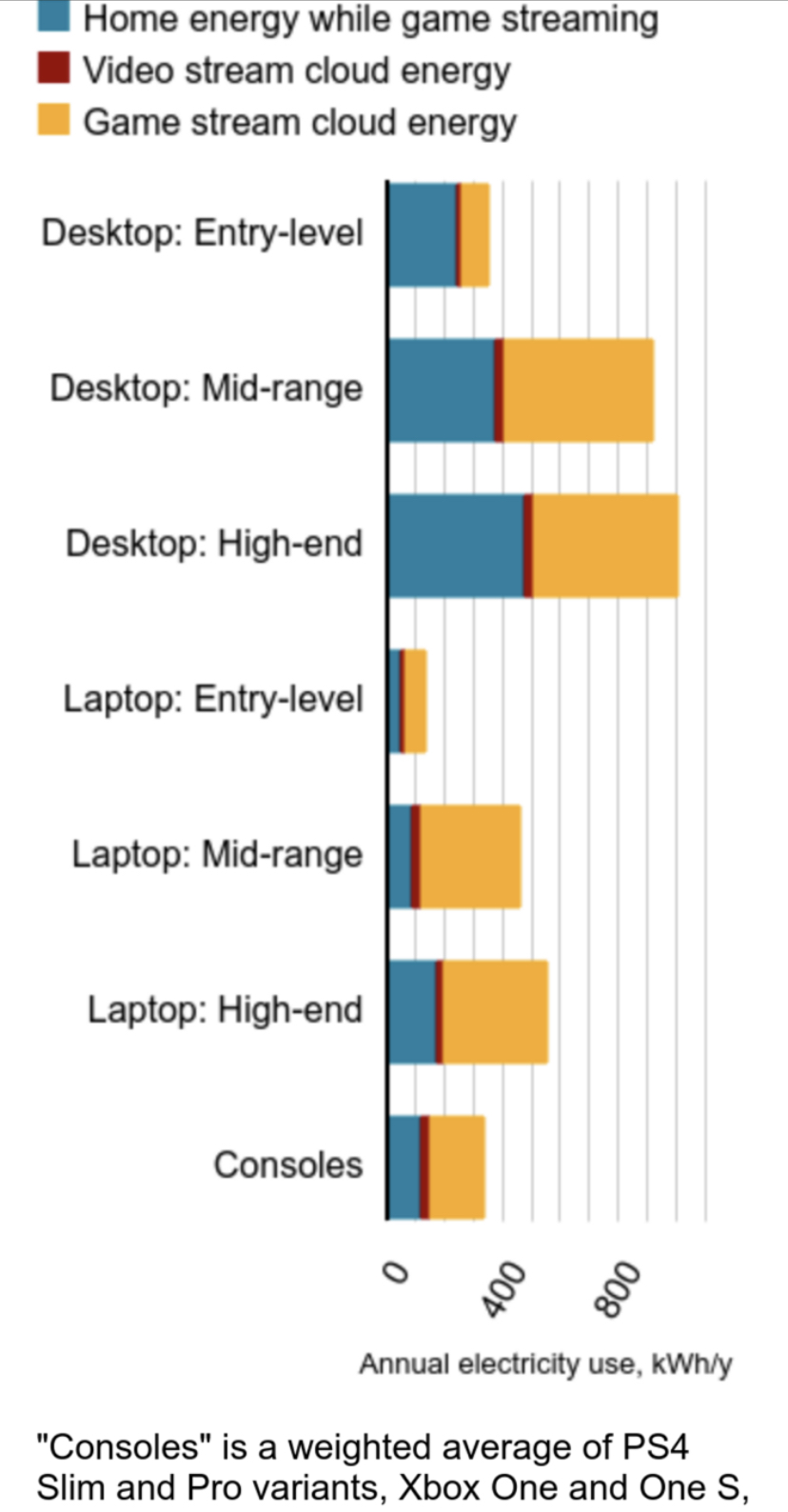 Home wi-fi routers are just the first step, and we can’t see most of it: the street corner communications exchange, miles of fibre-optic cable, core network infrastructure and – ultimately – the data centre.

The Lancaster University study looked at three scenarios – one where streaming remains niche, as now, a middle ground, and one where 90% of gamers end up gradually switching to streaming over the next decade.

After the decade-long transition, they estimated emissions would be 30% higher per year from 2030 in the high-streaming scenario compared to a low-streaming one.

Such estimates are a matter of debate, and some academics told the BBC the assumptions for some figures used are too high.The Lancaster team also tried to offset the emissions tally by accounting for the carbon savings of fewer plastic consoles being manufactured – another rough estimate.

They also point out that their assumptions are based on game streaming at modern standard 720p and 1080p resolutions.

“If streaming at 4K resolution becomes widespread, then it may well be game over,” the study warns.

“Despite the images of invisibility and purity conjured up by the word ‘cloud’, it is in reality populated with intense amounts of energy-using hardware,” says Evan Mills, who headed up the Green Gaming project at the US Department of Energy’s Lawrence Berkeley National Laboratory.

And while his assumptions in 2016 were different from the Lancaster team, Mr Mills did come to similar conclusions.

Mr Mills had two scenarios – one in which only 20% of gaming was done using a cloud by 2021, and another where 75% of gaming time was streamed.

The cloud gaming scenario would use 17% more energy overall, he concluded.

For example, a 10-watt streaming device – like a media stick plugged into a TV – can use an extra 520 watts of power in the network and data centre – making the total greater than local desktop PCs, Mr Mills’ team found.

In addition, a console, on average, uses 156% more energy when cloud gaming compared to local gaming – and far more than watching a film on a video stream.

They estimate roughly 300 watts of power is used in the data centre, and about 182 watts are spent on all the internet infrastructure in the middle – for every connected gamer.

“Cloud-based gaming is by far the most energy-intensive form of gaming via the internet,” the team concluded.

There are arguments in favour of cloud gaming, however.

Gamers could use lower-powered, more energy-efficient devices at home, since all the heavy lifting is done in a data centre. And fewer consoles being manufactured means fewer in landfill at the end of their useful lives.

There are also no discs to make, and the cost of transporting them to physical stores vanishes.

Is your Netflix habit bad for the environment?

Is 30 minutes of Netflix the same as driving four miles?

Digital game downloads have already been replacing physical copies over time – but they have some of the same problems as streaming.

“Download sizes actually give streaming a run for its money,” Mr Hazas says.

Some popular titles are more than 100 gigabytes in size – a long and power-hungry download process that streaming does not require.

At lower resolutions “it might be in some cases actually be better to stream”, he adds.

Microsoft says its cloud gaming servers “are more power efficient than a standard home console” and highlights that each server is shared by multiple users “which creates significant energy reduction”. 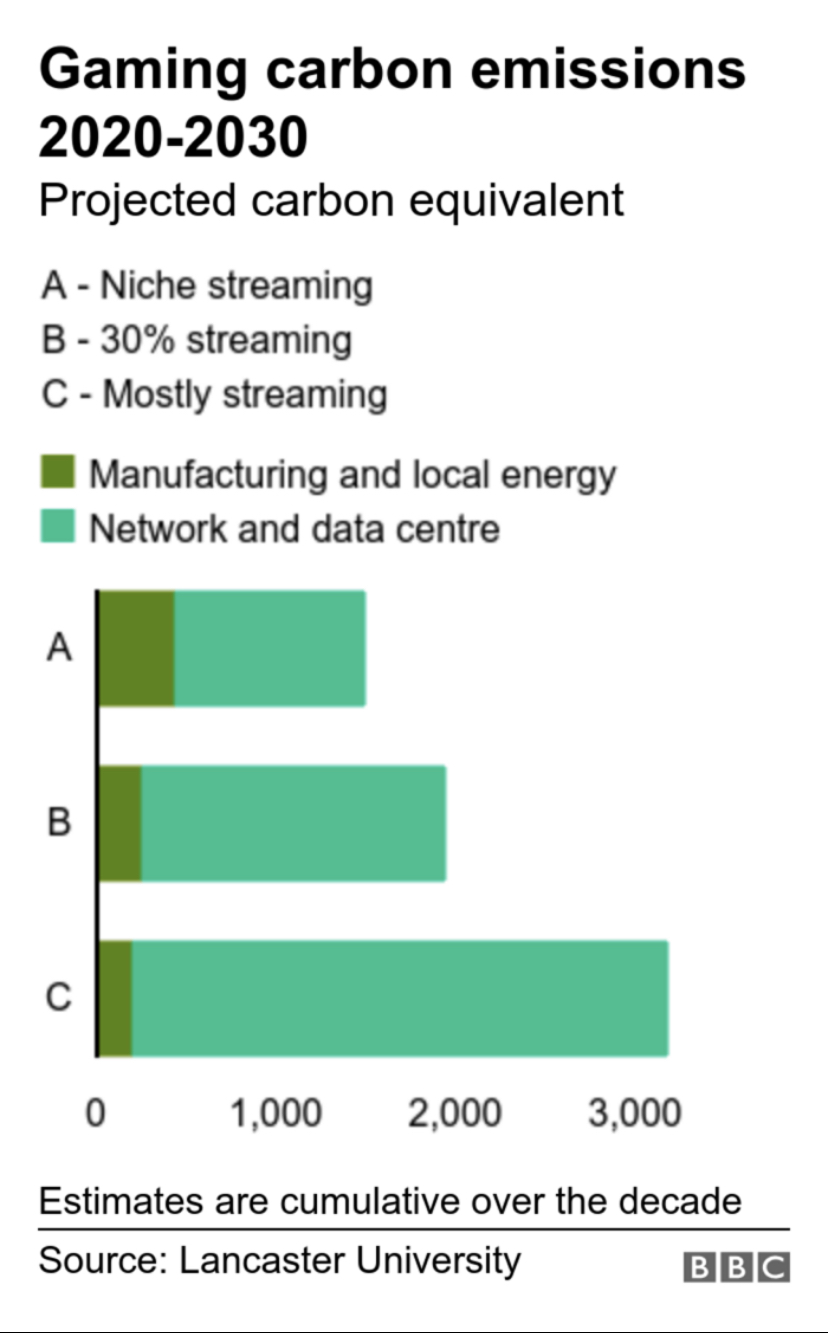 Google says its data centres – such as the ones that run its Stadia gaming product – are twice as energy efficient as the average data centre.

And both say all their data centres are carbon neutral.

Being carbon neutral is a complex topic, but most major companies achieve it by buying carbon credits – investing in “green” projects to offset their emissions.

Shadow, a French firm which provides users with fully functional Windows PCs that they can access through the cloud, said it was very aware of the potential environmental impact.

But “overall, we are convinced that our model is much more sustainable than the old one, in which we multiplied devices that were always more rapidly obsolete,” a spokesman said.

Researchers doubt the efficiency gains in data centres are enough to offset the energy demands of game streaming – but admit they don’t know exactly how the inside of corporate data centres work.

“A lot of stuff is secret,” Mr Hazas says “so these things are really hard to model”.

But things may yet improve. The Lancaster study acknowledged that it cannot predict what energy-efficient technology might lie ahead.

“There is a long history of detractors spinning factually incorrect stories about the internet’s energy use.

“But it’s also the case that improvements in efficiency have been offset by increased internet traffic,” Mr Mills explains.

That is the opportunity – and the problem – for a cloud gaming future: more demand means more stress on the network, and any efficiency gains will have to improve at the same pace.

Shaheer is passionate about living a life seeking un-ending knowledge, philomath, as you may think of him. He's a student of Finance and a keen observer of Business and Indian-Political scenario who takes pleasure to pen down his views and opinions on the same. As his guiding mantra to life, ‘Come what may , life goes on’ helps.